Why Weird Al Yankovic Should Be An American Idol Judge

I originally posted this back in February of 2010. Things have changed a bit, but my points are still valid. As the television show American Idol seeks to regain higher ratings and bring in new judges, they should serious consider Yankovic. Read on. -Ken

The Fox television show American Idol is reaching a critical stage. Original judge Paula Abdul left before the current season. Original judge Simon Cowell will be leaving after the current season – and who knows about the last original judge, Randy Jackson? The show, which has catapulted dozens of artist careers and generated crazy money through ad sales, music sales, and texting/call charges is getting stale and is in danger of dying sooner rather than later.

There is much speculation of who could be a new judge on the show.

I think the show should bring in “Weird Al” Yankovic as a permanent judge. I’m not kidding. I know – funny music doesn’t get the respect it once did; as a result, some people dismiss Yankovic or mistakenly think he’s not all that talented. But they are wrong. Very, very wrong.

What is the job of an American Idol judge? From what I can tell, the judges must:

1. Be able to distinguish those who have singing talent and pop star potential from those who don’t – from a pool of 16-28 year-olds.

2. Be entertaining on both heavily edited and live television, mostly through comments, facial expressions, and body language.

3. Be able to offer constructive criticism and mentoring to aspiring contestants and actual contestants.
I think it is safe to say that Yankovic can do all three well.

Here are specific reasons why Yankovic would be good on AI.

1. He’s multitalented. He has lasted for almost three decades so far as a popular recording artist, songwriter, concert performer, and musician, also working as a film and television actor and writer, and a director of music videos. He does more than his well-known direct parodies of current hit songs (which he does very well). He also does original songs, many of which are done in the style of well-known artists. He also has experience in taking hit songs and translating them into another style (see his polkas), as some AI contestants attempt during their weekly performances.

2. He has closely studied pop music artists for decades. To be good at his main bread and butter, he’s had to scrutinize music artists, and carefully evaluate what they do and how they do it.

3. He recognizes talent in others. Ever see/hear his band at work? In his movie “UHF”, Michael Richards was cast pre-Seinfeld and Fran Drescher was cast pre-The Nanny. Enough said.

4. He has proven staying power. He has outlasted many of the acts he’s parodied.

5. He knows the music industry, and what is like to struggle through recording and touring and struggling for respect. He has not only had to deal with his own record company, but the record companies of acts he has parodied.

6. He is respectful of other artists. For example, he will not sell a direct parody without an artist’s blessing, even though he legally could. His parodies are more like a tribute instead of a mean-spirited dig.

7. He appreciates different musical styles and genres. Just look at the music he records and performs!

8. He is used to dealing with crazy people (record execs, artists, fans), so he can handle the crazies that show up during auditions.

11. He’s fun to watch. His facial expressions, body language, and quick wit would work well on AI. (He would also be good in interviews promoting the show.)

12. He’s family-friendly, both in his material and personal life. You won’t read about Yankovic driving drunk with a car full of strippers.

13. He has a daughter who is growing into the target audience of AI.

14. He has a highly professional, perfectionist work ethic.

If not AI, then The X Factor or some other show should get Yankovic as a judge. I am NOT kidding.

Full disclosure: I do not make any secret of being a huge WAY fan. 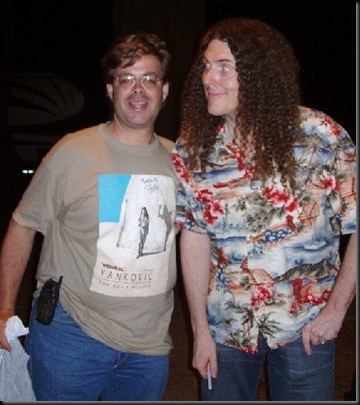 UPDATE: I meant to do a search before I posted this. Sure enough, someone else has proposed this idea... they suggested it last year when Abdul announced she was leaving the show. Also see here.