I’ve been a fan of "Weird Al" Yankovic (WAY) for almost my whole life. And being the obsessively analytical guy that I am, I have analyzed his music many ways. His Al-bums typically have a polka-arrangement medley of recent hit songs (interesting how funny the actual lyrics of "serious" songs can be, especially with the WAY treatment) and the rest of the songs are an even balance of direct parodies of hits and original compositions by Yankovic, though often meticulously done the style of a famous musical act.

Some common themes of Al's lyrics, either for the direct parodies or the originals, have been...

I perceive that there has been a change in that last theme since Al finally got married (to a very lovely woman) and became Daddy to a girl.

Recently (7/25/2011), the Grammy Museum hosted Yankovic for an interview, followed by Q & A, and my wife and I were blessed to attend. Although this wasn't the usual WAY public event (concert or al-bum signing), the typical Al crowd, albeit only 200 of us, was there: people of very shape, size, color, age, style, and I'd guess religion, too. I wanted to ask him a question I haven't heard him answer before, and I think I succeeded in asking him something he hadn't even considered before – whether or not he perceived a change in his lyrics since marrying.

At first, Al thought maybe I was accusing him of going soft, because he mentioned that he's always been fairly family-friendly. But that wasn't what I was talking about.

Here's what I perceive. Sometimes the female characters in his songs were the ones who were dysfunctional or horrible people, and sometimes the males were. Since getting married, it has only been the males.

Song: "Such a Groovy Guy"
The song is about a guy who thinks he's all that, and he treats women like crap.


Al-bum: Dare to be Stupid

Song: "One More Minute"
About all of the painful/irritating things he would rather do than spend one more minute with the woman who has dumped him.

Song: "Girls Just Want to Have Lunch"
Women want nothing other than men to treat them to lunch.

Song: "Good Enough for Now"
He tells her that he's not all that into her, but he'll use her for now.

Song: "Alimony"
She's taken everything and is bleeding him dry.


Al-bum: Off the Deep End

Song: "I Was Only Kidding"
His professions of commitment and love were lies, and he rubs it in her face, mocking her.

Song: "Airline Amy"
He's delusional and thinks he has a relationship with a flight attendant because she's doing her job.

Song: "You Don't Love Me Anymore"
Despite her repeated attempts to kill him, he thinks she loves him.

Song: "She Never Told Me She Was a Mime"
He was clueless about how annoying she was.

Song: "Since You’ve Been Gone"
He is miserable... but it was worse with her.

Song: "I'm So Sick Of You"
She's repulsive and annoying and clueless.

Song: "My Baby's in Love with Eddie Vedder"
His girlfriend/wife is obsessed with an unobtainable other man.

Song: "Wanna B Ur Lovr"
He offers a series of horribly lame and tacky pick-up lines.

Song: "Confessions Part III"
He forgets her name, is an unhygenics, disgusting liar who confesses to cheating and making a child with his "skank".

Song: "Close but No Cigar"
He doesn't think any woman in the world good enough for him, so he stupidly rejects women who are both highly attractive and intelligent women.

Song: "Do I Creep You Out"
He's an obsessed stalker.


Bad Hair Day is my ultimate example, as there are two songs strongly and clearly about lousy women and none about the man being bad. Dare to be Stupid is a close second, but Bad Hair Day is much stronger in this regard. Other songs that depict the female partner in a negative light are: "Alimony", "She Drives Like Crazy" (and there’s no counterbalance on UHF), and "My Baby's in Love with Eddie Vedder".

Contrast Bad Hair Day with Straight Outta Lynwood, which has three songs about the male partner being horrible, but, none about a female partner. It is noteworthy that he gives tribute to his daughter on the cover.

Now, the anomalies or exceptions would be the first, eponymous Al-bum, and Polka Party!, each of which have the one song about the bad male with none about a bad female. Off the Deep End has two bad male songs to the one bad female song, but the bad female in that song is homicidal.

I consider "She Never Told Me She Was a Mime", the one love song on Alapalooza, a wash.

Notice that since he married, there hasn't been a single song on any of his three Al-bums in which the woman has a problem; only the male.

This could be because when Al was a longtime bachelor, he (and his buddies) dealt with a lot of bad dates or difficult women, and that changed when he married. Now, the woman he loves has probably told him about some of the horrible dates and men she dealt with over the years. And as a father to a daughter, he's no doubt thought of what social scene his daughter is facing in the future.

Fortunately, WAY's songs as funnier than ever.

If anyone wants to pay me to lecture about subjects like this, I'm definitely open to making money. 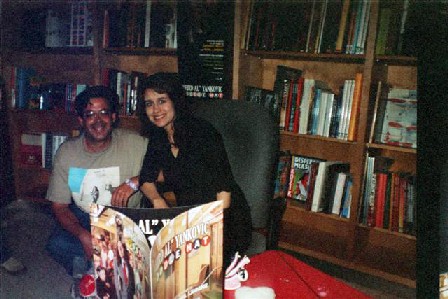 There I am, with Mrs. Yankovic.
Posted by Kori and Ken Pellman at 9:37 PM 1 comment: