Stories about food chain sales, openings, and closures interest me. Gee, I wonder why.

Nancy Luna reports in the Orange County Register that Baja Fresh has been sold for $31 million.

Quotes:
>>David Kim is the key investor in the deal, which includes other private stakeholders. He runs RD Restaurant Group in Anaheim, which operates and franchises hundreds of Sweet Factory, KaBloom, Cinnabon and Denny's locations.

Wendy's bought for $245 million and sold for $31 million? Sounds like a dot.com deal.

>>Baja Fresh operates 300 restaurants, including 23 in Orange County.
[snip]
The sale comes as Wendy's looks to shed its secondary brands to focus its energies on reviving sales at its flagship hamburger chain, interim Chief Executive Kerrii Anderson said.
[snip]
When Wendy's bought the Thousand Oaks-based Baja Fresh in 2002, it was one of the hottest concepts in the growing fast-casual segment. The chain caught the attention of health-conscious consumers with its "fresh Mex" fare and self-serve salsa bar.<<

I love the salsa bar. If they get rid of that, I'll never forgive them.

>>Wendy's bought Baja hoping to put some muscle in its own earnings. But, soon after the acquisition, rival chains with similar strategies and faster service began winning the attention of diners, including Chipotle and Jack in the Box's Qdoba Mexican Grill.<<
Posted by Kori and Ken Pellman at 6:37 AM No comments:

Jennifer McLain of the Pasadena Star-News (and sister papers) quotes me in a story about "garbage collection":

Quotes:
>>"We're going to be doing this all over the county," said Ken Pellman, spokesman for the county's Department of Public Works. "Rowland Heights and Hacienda Heights will be among the first to get this."
[snip]
The board is expected to vote by the end of the year, Pellman said.<<

I won't have the chance to speak for Public Works for very much longer. I'm on the move.
Posted by Kori and Ken Pellman at 8:54 PM No comments:

Staff writer Kenneth Todd Ruiz talks about the closing eatery, where I ate with a couple of my buddies on the night of my bachelor party... eh, get-together.

Quotes:
>>Sunday is Shakers' last day at the corner of Arroyo Parkway and Cordova Avenue.
[snip]
Most patrons say Shakers' convenience, comfort and the people on both sides of the counter account for its appeal. Many enjoy the food, but it's not the first thing that springs to mind.

Manager Lupe Garcia Woodward - who said he met his wife more than 20 years ago while employed at the Shakers in Glendale - hopes all the customers and employees make the move around the corner to the Central Park Grill on Raymond Avenue when it opens under the same ownership.
[snip]
Shakers will live on in name at other locations - owners Henry Yost and his son, David, own one in South Pasadena, two in Glendale, and Wild Thyme in South Pasadena. They are also part-owners of Beckham Grill in Pasadena.<<

Pasadena has seen condo building rising everywhere, and other new development that crowds the long-established streets.
Posted by Kori and Ken Pellman at 10:01 AM No comments: 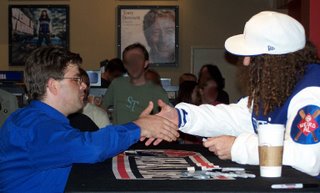 Or, maybe he's just trying to get me to wake up, or we're going to thumb wrestle. A kind soul took this picture at the recent signing and e-mailed to me. Holy cow I'm white & nerdy.

Yeah, that's really "Weird Al" Yankovic under that cap and hair.
Posted by Kori and Ken Pellman at 9:09 PM No comments: