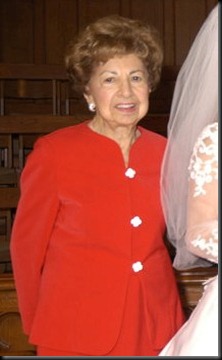 I noticed that the booklet for her memorial service listed the date of her death, and her birthday, but not the year of her birth. That was so Aunt Vicky. Very few people knew exactly how old she was, and that was the way she liked it. She even argued with paramedics who came to her home, not wanting to reveal her age. There are sources, including some “official” sources that got the year of her birth wrong.

Having a ceremony for the recently deceased is a unique rite in that the celebrated isn’t alive, and none of those who are present have had one of these rites in their honor; none of them have died. But every single one of of them will - barring anything of Biblical proportions happening. The same can’t be said of retirement parties, weddings, graduations, birthdays, or any other religious ceremony.

Aunt Vicky hated to be thought of as a grandmother. She was “Aunt” Vicky to quite a number of people of a wide range in ages. However, she did marry a grandfather, and thus became a grandmother. And even before that, she was like a grandmother to various kids, including me and my siblings. Heck, one of my sisters was named after her.

She was supposed to die two years ago.

That’s what the doctors said. She was in the hospital and it wasn’t looking good. They wanted to do a tracheotomy. It was time for the Last Rites.

But she made it out of the hospital. Without a hole in her neck.

And then there were other times it looked like the end would come any day. But she always managed to recover enough to make it clear she could be around for a lot longer. It was quite remarkable, and we joked that she would outlive us all. Unfortunately, recovering somewhat also allowed her to do things like fall down – something that can’t happen when you’re in bed, not moving.

And so the sharp downs and gentle ups that never quite got her back to where she was before the downturn finally came to an end on June 8.

Until that end, she kept up her appearance. That was the way she was.

On Friday, July 23, there was a church service for her that brought together family and friends. I was honored to be one of three “family” members who people who spoke about her. Her brother spoke, and another “nephew” from my generation spoke.

Afterwards, we gathered for a luncheon in her honor at the California Institute of Technology.

Aunt Vicky was one of those women who could tell a quite a story,and carry on a conversation about almost anything. She could make her opinions about everything very clear – from the state of the economy, to food at a restaurant, to how that other person was driving, to your weight and how it was going to kill you, to what you were wearing. She also wouldn’t discourage you from erroneously assuming she was a member of your ethnic group. She might even encourage that belief by drawing upon some of her vast knowledge of different customs.

She was one of those women who shattered glass ceilings, opening the way for women to follow. She did that at General Motors until she was recruited to come to NASA’s JPL in Pasadena, where she served on a committee that sought to reach out and recruit women and minorities.

When I came along, she was joined at the hip to my mother’s uncle. That’s how she became my Aunt, even though they didn’t make it official for many years. They would come to family dinners at our house, and have us over to their separate homes.

Aunt Vicky would even have me and my second cousin/best-friend/partner-in-mischief/younger-by-mere-weeks Shannon spend nights at her place and leave a pile of dirt in her bathtub after a day of playing. We couldn’t have been more than nine or ten when she had us dress up with jackets and ties and she took us to some fine dining lunch at what was then the Huntington Hotel. She wanted to show us how to do this as proper gentlemen, so she had us be the ones to approach the maitre d’. She ordered a hamburger and ate it with a knife and fork, though she didn’t allow us to order burgers.

A picture she took of us on that day is one my most treasured possessions, as Shannon was tragically killed not long after that, along with his maternal grandfather and only maternal uncle, when their small plane crashed in the Canadian wilderness.

With the passing of Aunt Vicky, all of my grandparents, both actual and honorary, are gone. It is the end of an era in my life. I miss them all. And I miss Aunt Vicky’s rice pilaf.

Posted by Kori and Ken Pellman at 6:54 PM No comments: